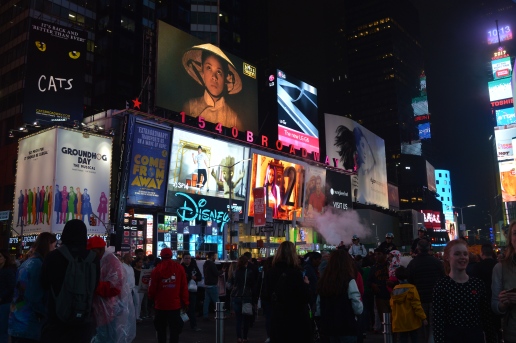 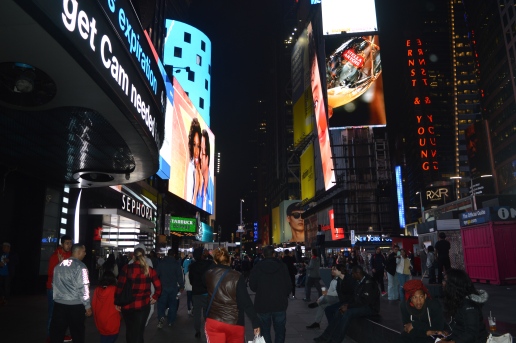 As I sit here enjoying a lukewarm cup of coffee and Nate finishes his breakfast; it seems as good a time as any to post about our weekend getaway to New York City. So why New York with a two and a half year old? Well, why not New York and here’s why! This past Valentine’s Day, Kurt’s gift to me was his credit card with a cute little note telling me to book a vacation ‘any where’ I wanted for the end of April and it would be on him. Sweet eh? Now, because I knew I’d be close to seven month pregnant with this little babe around that time, going any where super far, flying, or down South was out of the question. Around this time in my pregnancy with Nate, Kurt and I took a ‘Baby Moon’ to Nashville, TN and it was amazing. We had a week of no work and just the two of us before we soon would turn into a party of three. It seemed like a nice idea to do a ‘Family Moon’ (?) if you wanna call it that, for myself, Kurt, and Nate. We decided on New York because it was still relatively close to us (about an eight hour drive) and we knew we wanted to see NYC at least once in our lifetimes. Plus, going there with two small children seemed very daunting. This way, we only had Nate to worry about.

We left Thursday early morning and arrived at our hotel around dinnertime. It would have been earlier but thanks to some GPS issues we were later than anticipated. Now I know exactly what everyone is probably thinking… “How horrible was it confining your two and a half year old to a car seat for eight hours?!” and truth be told, it was not hard at all! Nate was AMAZING! I had fully prepared myself for what was probably going to be the worst eight hours ever but Nate shocked us all by being an absolute dream in the truck. On the way down, he did nap periodically but they weren’t long ones by any means. He mostly stared out window pointing to all the trucks we’d pass or played on his LeapFrog game pad. Like I said, he was a dream. I also packed lots of snacks for him as well so any time he started acting up, I’d just offer him some Goldfish or a Bear Paw treat and he’d calm right down.

*Side note: this was not the longest road trip Nate has ever done either! When he was seven months old, we drove out East with our friends and their two week old son. That was a 14 hour drive!!*

Our good friends Bryan and Jen also tagged along with us on his trip so once we all got settled into our hotel rooms, we decided to head into the city for a few short hours before it got too late. We stayed at the Hilton Meadowlands hotel and it was perfect; mainly because they had a Starbucks INSIDE the hotel but also because they offered a complementary first come, first serve hourly shuttle bus to the Seacacus train station and then from there it was straight into Penn Station. This was my biggest concern about staying outside the city because I still get nervous taking the GO train to Union station and I’ve been doing that since I was a teenager! Even though we’d been reassured by the hotel staff that it was an easy commute, I was still paranoid that we’d miss our stop or somehow end up going in the wrong direction but as it turns out, it was the easiest commute we could have asked for. Once we got to Penn station, we immediately decided the best thing to do was to see Times Square and grab some dinner. If you’ve never been to Times Square at night, it’s definitely a must do! It’s so bright that even at 9pm when it should be dark out, it feels more like early to mid afternoon! The lights are almost blinding. It was seriously unreal to see THAT many people in one place at one time. They’re just every where! From tourists, to locals, to people commuting home from a long work day; it’s jam packed! I thought maybe Nate would be a bit overwhelmed with all the people and start crying or throwing a fit but he was just as in awe of it all as we were. No matter where you turned, there was something or someone to look at it. 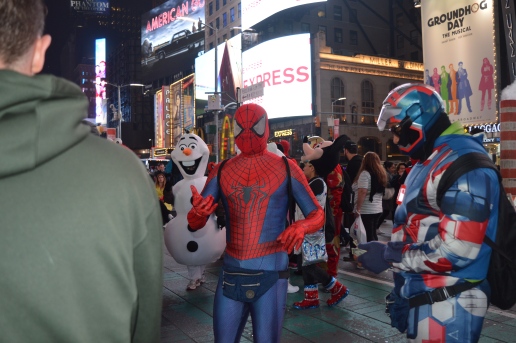 So, like I said our first night in the city, we basically just wanted to get a feel for Times Square and grab some dinner. We figured everywhere we tried to go to would be packed because the Rangers and Sens were playing so we just kind of chose a random Irish pub and hoped there would be a spot for us. I was concerned we wouldn’t be able to get in anywhere because we had our umbrella stroller with us but thankfully, the hostess was very accommodating. I guess when the establishment is in one of the biggest tourist cities in the world, you kind of have to be. Nate was a little fussy by this point in the night. But can you blame him? The poor kid had been strapped into a car seat for eight hours then had maybe 30 minutes of freedom before being strapped into a small stroller and then having to sit still in a high chair in a super busy, crazy loud restaurant. After we ate, we strolled through Times Square a little more then walked the ten blocks back to Penn Station in order to make it back to where our shuttle would be picking us up. The only downfall of the Hilton’s shuttle service was that the last pick up time from the train station was 11:45pm. Now for us, that was fine because we really weren’t exploring the night life of NYC but I could see how this would be a downside for anyone who wanted to be out until the wee hours of the morning. But I suppose if you’re down for that, then shelling out some cash for a cab ride wouldn’t be a big deal.

Once we got back to our hotel room, I don’t think we were awake for more than 20 minutes! We were all exhausted from eight hours worth of driving and knew we needed to get enough sleep to prepare ourselves for what would turn out to be two of the longest, hottest, tiring, and amazing days ever!

Well, there you have it! Our first night in the ‘Big Apple’! Stay tuned for the next NYC post!