I almost wish that it was July already so these posts would end… I don’t actually WANT these posts to end but I feel like every month my anxiety levels build and build knowing that the it means Eli is a month closer and closer to turning the big ONE! I love him being a baby and I want to keep him a baby forever but every time I post a new monthly picture, I start internally freaking out because I feel like the first birthday is such a huge milestone, not only for Eli but for myself too. It means I will be returning to work. It means the boys won’t be home with me 24/7. And it also means that Nate will be starting school… All these that I am currently not ready for but want to happen just so I can get them over with! 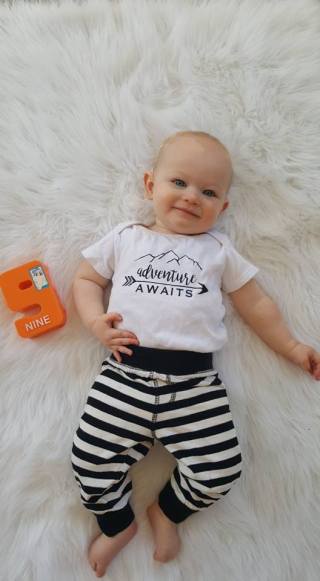 Eli has had a pretty big month nine and has experienced a lot of new and fun things. It’s so cute to see him really start focusing on the world around him and developing into his own little personality! Here’s a small peek at our little snuggle bug’s growth and development!

Cut his very first tooth! Eli FINALLY did something before his big brother! Yay!!! Nate was just over 11 months (!!) when he cut a tooth and Eli’s poked through just before he turned nine months old! He’s not working on his second bottom one!

He’s crawling! Well, almost crawling! He will take a few paces forward and then usually sit back up right and starts crying to be picked up but he’s making more and more progress every day!

Took another long-distance road trip and was a champ the entire time! At three months old we drove to Boston which was an eight hour drive and we just returned from Nashville last week which was a 14 hour drive! Both boys were fantastic!

Champion eater! This kid will pound back anything you give him! He loooooves food and literally does not stop eating!

Loves to dance! When he gets super excited about something (like food) he does the cutest little dance where he shakes his head and body side to side. While in Nashville, we nicknamed it the “Biscuit Dance” because it was usually done while someone was feeding him some sort of bread product haha

Chatty Cathy lately! He’s started “talking” up a storm since we got home and can fully say the word YEAH although I’m sure it’s by accident, we still think it can count as his first word haha

Has been sleeping through the night for several weeks now! Which thinking about it, I guess is really the first “milestone” he reached before Nate since Nate was still waking up once a night to breastfeed when he was Eli’s age.

Has now turned into a squirmy worm when you’re trying to change his diaper. He does not enjoy being forced to stay on his back and loves to twist and turn making diaper changes almost impossible!

Does not appreciate being left alone and someone needs to be within his eyesight at all times.

Loves his big brother immensely and is fascinated with basically everything Nate does.

Is slowly starting to love his baby related toys like his Jolly Jumper and Exersaucer. It’s been an uphill battle with him but he’s finally starting to come around. Thank God…

Is still the biggest snuggle bug and would be perfectly content being held 24/7! 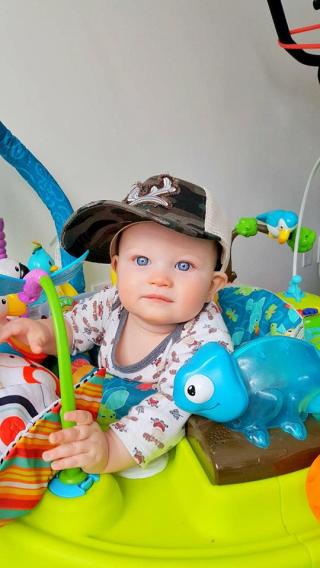 What a crazy nine months it’s been! I can’t believe we’ll be into the double digits in a few short weeks!