As most of you know I spent my first Mother’s Day at the Blue Jays game with Kurt and Nate. It was definitely a great weekend and I was so appreciative of Kurt and how much effort he went to in order to make sure I had a great day. So of course for his first Father’s Day I wanted it to be just as great as my day was. I was so excited when I realized we’d be spending his very first Father’s Day in New Brunswick. That right there made it all the more special. To know that this was going to be a day to celebrate not only Kurt and Chris’ first Father’s Day but also our first (of many) family vacations together, I wanted to make sure it was a very special and memorable day.

Sunday morning when we woke up Nate gave his daddy the card he picked out (well maybe he had a little help!) and I told Kurt I would pay for everything for the day since I hadn’t had a chance to actually buy him a gift. To be honest, some times he can be hard to buy for so it’s usually easier for him just to pick out whatever it is he really wants.

We got up and got ready for our day out in St. Andrews, New Brunswick and of course it was raining! It wasn’t just spitting either. It was full out pouring rain! Talk about throwing a wrench in our plans. Saint Andrews is full of little shops so we had been planning on taking our time and walking through the streets going in and out of the stores. None of us had umbrellas or rain coats either so it was basically a given that we were going to get drenched. We decided to head to St. Andrews anyways and just hoped the rain would let up. It didn’t.

The first thing we did was head inside to get some lunch. We settled on a small shack/bar type place and ordered. Being such a small place it felt really packed. I enjoyed my pulled pork sandwich and I think everyone else enjoyed their meals too. It was hard to say if they did or not because we were all really just focused on how crappy it was outside. I don’t think we really got to enjoy the atmosphere of the place. However; Nate on the other hand was as happy as a clam! There was a six month old baby at the table beside us so they spent the meal literally screeching and laughing at one another. It was really cute! I love seeing Nate’s reactions to other babies/kids. He gets SO excited and just completely lights up.

After eating, we started our trek through the stores. Unfortunately, because it was so rainy and cold none of us were having the best time. It was still fun and I wouldn’t have minded so much had it just been rain but it was also windy and COLD! So needless to say, it made the rain seem 100 times worse. That being said, I did find some cute souvenirs and Nate didn’t seem to mind the rain and cold one bit!

When we were finished with the stores we stopped in at the Superstore on the way back to our apartment and got some groceries for dinner. Earlier in the day I had told Caralin I really wanted to either find a restaurant that had a live lobster tank or I wanted to cook our own lobsters since I knew how disappointed Kurt had been on Friday at dinner. So when we saw that the Superstore sold live (and cheap!) lobsters it was a no brainer that that’s what we’d be having for dinner. We also picked up some steaks, mussels, and scallops. Talk about a surf and turf feast! We got back to the apartment and immediately started cooking away!

I’m pretty sure despite the rain and cold; the guys still had a great first Father’s Day. They got to spend their day with their sons so I mean how could they not have a great day? 🙂

Thanks for reading! Here are some pics of our adventure in St. Andrews! 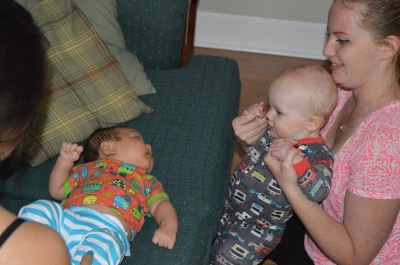 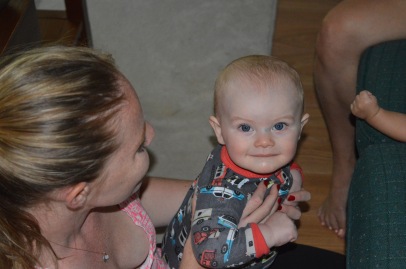 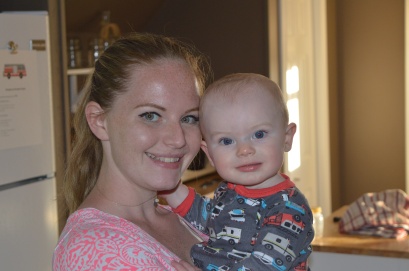 Based on my shirt, I’m pretty sure that these were from the day before but whatever! 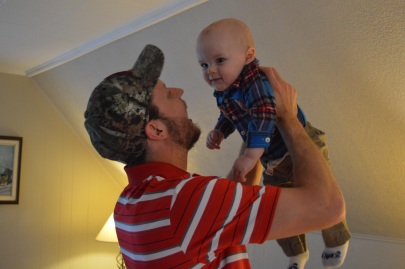 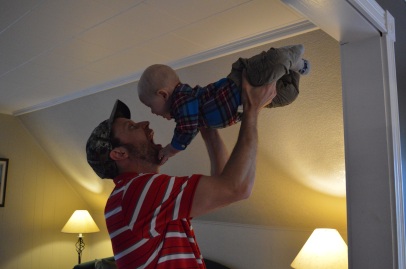 Nate loves being tossed in the air and playing “Super Baby”. My dad used to do that with me and my sister as a babies so it’s really funny seeing how we’re doing it now with Nate. 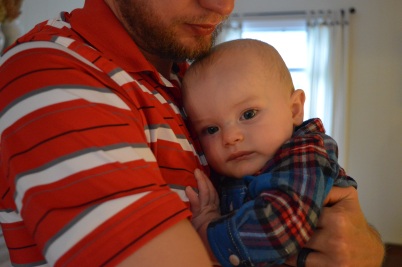 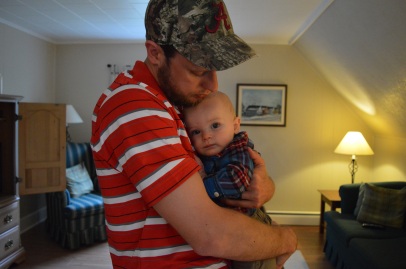 I LOVE these two pictures of Nate and Kurt! They make my heart burst! 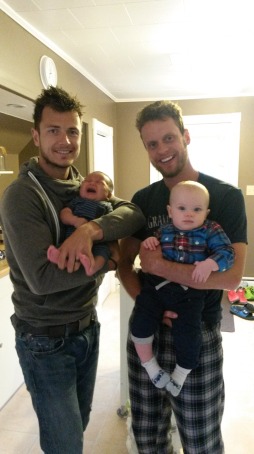 Sorry for the bad quality of this one! It was taken on my phone and apparently the camera on it sucks! And Baby G wasn’t too happy during the pictures!

Happy Father’s Day guys! You are two of the greatest dad’s out there and the boys are lucky to have you!

Follow Freckles and Cheeks on WordPress.com
Join 280 other followers