In one week little Nate will be 17 months old! Holy crap! Where is the time even going? I still have a hard time believing that it’s already the middle of March! Didn’t we JUST celebrate Christmas? How is it already past St. Patrick’s Day? I’ve said it a million times before and I’ll say it a million times again, time flies by waaaay too quickly!

He’s got the craziest bedhead! His post-nap hairdos never fail to make me laugh.

We’ve been battling a molar situation for the last couple of weeks! Poor kid doesn’t even have all his front teeth yet but he’s starting to cut one or two molars!

Great eater! The kid will eat just about anything! I’m so impressed with his palate. Last night he couldn’t get enough of our fish and I was so surprised he was enjoying it.

Loves the cats! He might love them a little too much actually! Poor Milo is so good with Nate. He tolerates having his tail yanked on on a daily basis.

Has the cutest little bum shake when he walks/runs! I can’t get enough of those little bum cheeks swaying back and forth. It’s just so adorable!

He’s working on talking. He can really only say mum-mum and dadada but we’re working on it. I’m not overly concerned just yet. He’ll get there.

One of the most expressive kids I’ve ever met. Everything fascinates him and it’s so funny watching him discover new things. His eyes get so wide and he’ll instantly point at anything new.

Daredevil. He definitely has no fear when it comes to things. He’ll climb up onto the couch and throw himself off just expecting that you’ll catch him. He climbs up the stairs in the blink of an eye even if there’s no one directly behind him. I’ve caught him a few times trying to climb the baby gates. He’s going to give me a heart attack one day!

He loves to laugh. Even when nothing remotely funny has happened, he just bursts into a fit of laughter which causes anyone around him to start smiling and laughing along with him.

He’s full of personality. Whether he’s being silly or funny or stubborn as hell, he’s got the best personality.

Obsessed with Thomas the Train, The Octonauts, and BubbleGuppies. I don’t want him to become a “TV kid” but these shows are a life saver sometimes. They just keep him so content and if he’s watching The Octonauts, he’ll go and get his five stuffed characters and bring them out to watch the show too.

The cutest little sleeper ever! He always sleeps in the most adorable positions. Whether it’s arms above his head or bum straight in the air, I could watch him sleep for hours with how cute he is. I often have to remind myself NOT to wake him up during nap time or bed time because I always have to sneak into his room to get a little glimpse of what position he’s in.

Curls upon curls upon curls! He definitely inherited his Daddy’s hair because I do not have any of the ringlets he’s been sporting lately. His hair is so blonde and curly and I just can’t get enough of it! It’s getting so long as the back but I can’t bring myself to get it cut just yet. He’s just going to have to be my little Boho Baby for a little while longer.

Pro door opener. We’ve had to buy things to baby proof the doors because Nate figured out how to pull on all the door handles in the house. He basically mastered it in one attempt. Now he finds it absolutely hysterical to go into the closet and throw all of our shoes across the house.

Has the cutest little red cheeks! Oh man, oh man. His post-nap red face melts my heart! He’s always so flush when he wakes up from his afternoon nap and his little red cheeks are just screaming for kisses. I just love them so much! And yes, I did type that as if I was saying it through clenched teeth.

Nate has some serious dance moves! He absolutely loves listening to music (mostly country because that’s what I usually have on). He’ll bop back and forth and jump around having the best time ever. He really loves it when Kurt and I start dancing along side him. Family dance parties are the best dance parties if you ask me!

It’s crazy to think come April he’ll be a year and a half old. I’ve noticed such a mental growth in him from October to now that I can’t wait to see what he’ll learn next. 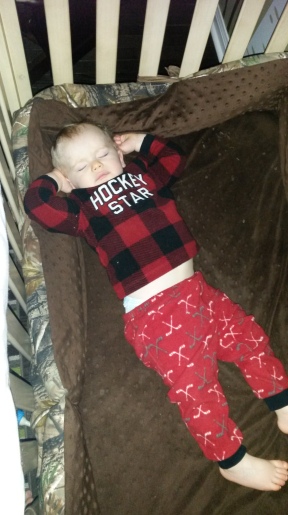 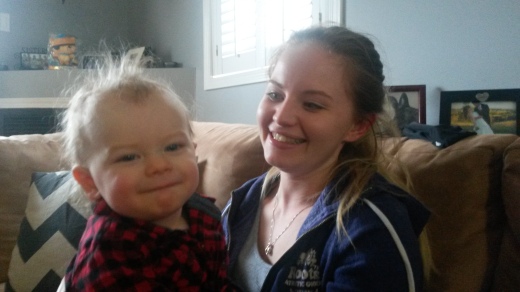