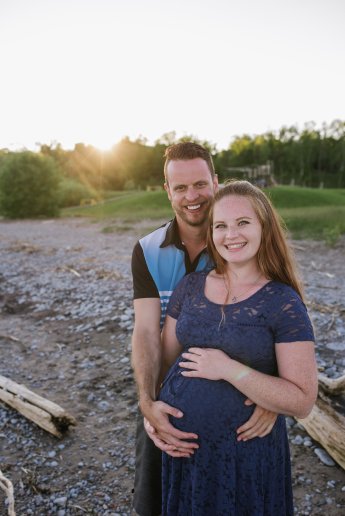 Who is your support person? This is mine. Right there in that picture above. The father to my two beautiful babies. The best friend I walk through this crazy thing called life with. The person who I rely on for so many, many things. He’s my person and I don’t think he ever gets enough credit for just how much he helped me through both my deliveries. To be honest, I don’t know many support people that do. I was thinking about this last night while I was trying to fall asleep. The support person -whoever it may be, spouse, friend, family member- is a vital role during your delivery. They’re your go-to person. The one who holds your hand, strokes your hair, whispers encouraging words in your ear when you want to give up, and goes above an beyond to help you through what can only be described as the most empowering and overwhelming moments of your life. Pushing a baby out (or laying on an operating table) is no joke. It is scary, intense, worrisome, thrilling, and about a hundred other things and who your support person is makes a world of difference.

Kurt is the type of person that probably would excel as a personal trainer or even a life coach for that matter. I’ve watched him politely push his friends while running or working out; handing out words of encouragement and motivation like they’re candy ( side note: I might actually work out if I was given real candy as a praise) and he never gives up on them. I’ve watched him countless times circle back while in his running group to make sure the ‘slower’ runners are doing o.k.. I’ve heard him tell them “You can do it! You’re doing great! Keep up the good pace! Awesome job!!” I’ve seen him slow his pace to almost a walk just so that someone doesn’t get left behind. He’s brought cards and flowers to his running mates when they’ve fallen ill or sustained an injury. He’s always the one saying “One more rep. Come on! You can do it!”. He never let’s them feel like they’ve failed and during both my deliveries, not for one second did he fail on me.

I seem to have a tendency to go into labour in the middle of the night; apparently it’s ‘my thing’. With Nate, my water broke at 2:15 in the morning and with Eli, we left for the hospital at 11:30 pm. This meant that not only had I been awake for almost 24 hours straight, but so had Kurt and while yes, I was the one physically birthing our two boys, Kurt’s job was not totally easy either. Have you ever been awake for longer than 24 hrs straight? (My record is 38 hours which I highly do not recommend) But if you have, then you know how hard it is to stay focused. To think logically. To put someone else’s needs above your own when all you want to do is close your eyes. Not once did he sleep during either delivery. Even when I told him to try and get a few minutes rest. Not once did he listen to the nurses when they told him he should lay down for a bit because it “might be a long night”. Not once did he leave my side unless I specially asked him for something (like ice chips). He spent almost two hours during both deliveries in the tub room where the temperature was easily into the mid to high 30s because I refused to get out of the whirlpool tub. He rubbed and massaged my back for hours on end and every time a contraction hit, he was right there giving me encouraging words of support and telling me how I was stronger than I thought I was.

With Nate, I had never gotten to the point where I was ready to say yes to an epidural mainly because my water had broken on its own and I was so excited to have him in my arms. But with Eli, the contractions were so painful (worse than with Nate) plus my water sac was still intact, so that coupled with my nerves of bringing home a new baby to Nate, made this experience so much more intense and before we even left for the hospital, I was trying to prepare myself for the fact that I was going to need an epidural. ***Now let me make one thing real clear before continuing on… I by NO MEANS think that if a woman has an epidural or a scheduled c-section, she somehow ‘gave up’ during labour. Birth is birth and whatever way a baby comes into this world is a miracle. But it was in MY birth plan to have a natural birth, mainly because I have watched an epidural take place and I almost threw up so the thought of that procedure being done on me probably would have given me a panic attack SO! like I said, I applaud any woman who gives birth naturally or medically assisted*** Throughout my labour with Eli there were a few times where I told Kurt I did not think I could continue on without an epidural. It seemed like every time they checked me, I hadn’t progressed as far as the intensely painful contractions would have suggested and I was convinced that this labour was going to turn into a full marathon, not a sprint (or like a breezy 15K) that Nate’s had been.

Every time I felt like throwing in the towel, so to speak, Kurt was right there reminding me I could do this. He knew my birth plan, knew what I wanted, and knows me well enough to know how hard I would have been on myself if I ended up feeling like I hadn’t ‘given it my all’. He rubbed my back and said no matter what I chose, he would support me through it but he knew I could do this. He even went so far as to hold the garbage can/ basin for me while I projectile vomited into it and changed the pads on the bed/ birthing ball every time I got up to pee. He truly went above and beyond to ensure that I was as comfortable as I could be while bringing our two boys into this world. And I know it might sound silly to give him all these praises when he didn’t physically give birth but without him mentally, I would probably view both my deliveries in a different way. If he wasn’t who he is deep down at his core, I might not remember those long hours with the fondness that I do now.

Your support person(s) is so important and not just during moments like bringing a baby into this world. For the ‘little’ moments too. The day to day stresses that make us feel like we’re alone. The “I’m so over this” moments. The “I can’t believe this amazing thing just happened to me!” moments. The small victories we each have on a daily basis, like when I get so excited that Nate all his lunch without a fuss and I call to Kurt this like it’s the greatest news in the world. Whoever your support person is, I hope they’re as great as mine is.

Happy Wednesday! Hope you enjoyed my random thought for the day! 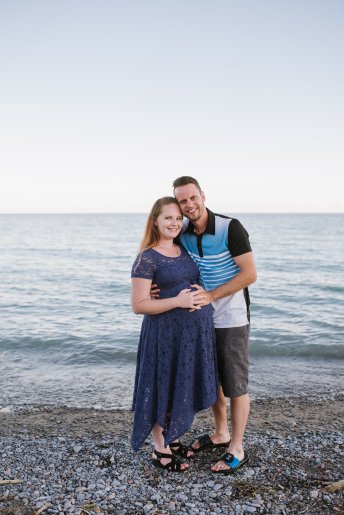